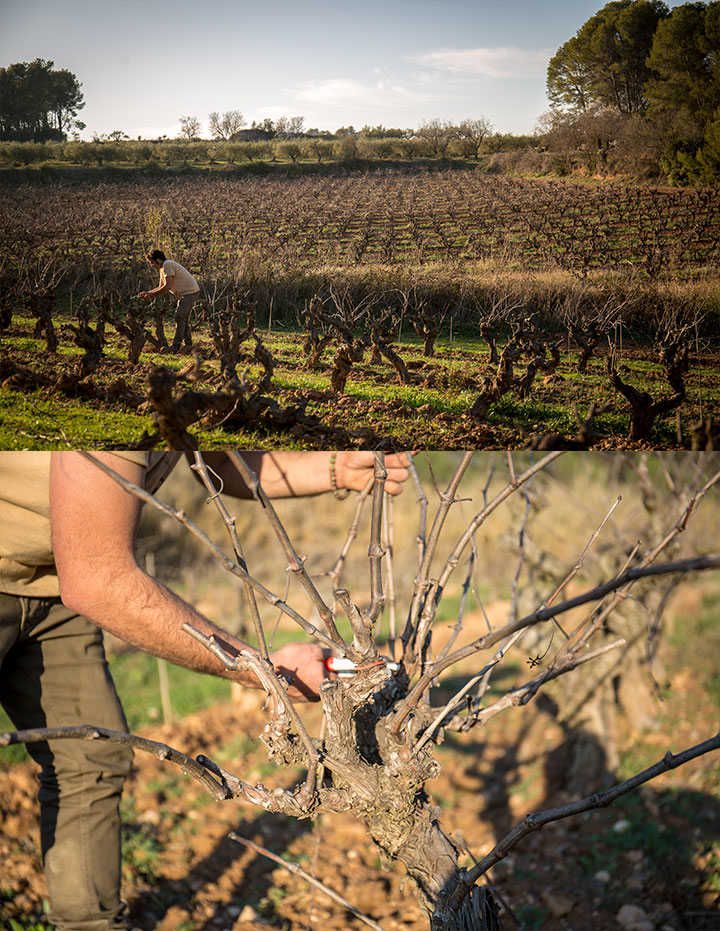 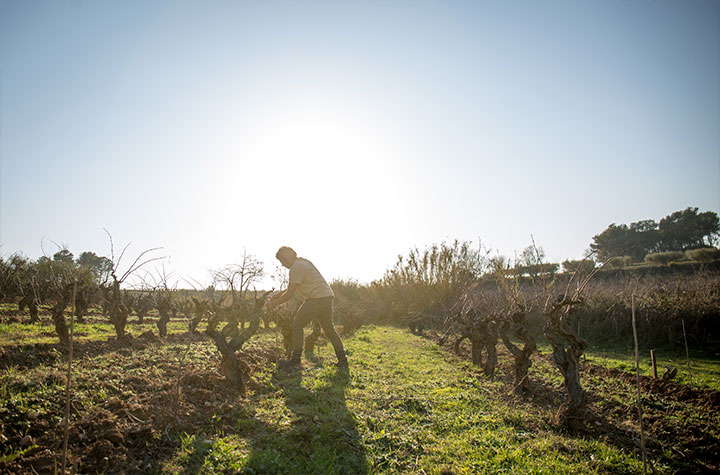 PRUNING FOR LIFE AND HEALTH

​​​”Simonit and Sirch observed a common problem across all of the wine regions in the world: premature vine death and the spread of diseases in the wood… “

He was not yet 18 when respectful pruning reached Gramona, a result of his father travelling to Italy and meeting the world’s leading experts. The agricultural engineers Marco Simonit and Pierpaolo Sirch visited Penedés in 2010, right when Roc Gramona was starting his studies at the School of Oenology at Rovira i Virgili University in Tarragona. “Simonit and Sirch had observed a common problem across all of the wine regions in the world: premature vine death and the spread of diseases in the wood. They created a sort of compilation of pruning practices, observing the longest-lasting vines and the training systems used in vineyards over 100 years old, such as the bush training in Priorat or the ungrafted vines in Manchuela and Ribera del Duero,” Gramona explains. “They saw that they were free training systems that allowed the plants to grow, creating new branches, while limiting them. Actually, they didn’t invent the method, because the practices they defined had already been applied in the past, but they should be credited with creating a compendium of knowledge; they theorised about respectful pruning and summarised it in four points,” says Roc Gramona. After an initial test in Veneto, the knowledge and experience of Simonit and Sirch began to spread around the world. In Catalonia, Gramona welcomed them with open arms out of a desire to be extremely careful and precise with the vineyards. “It is more respectful pruning than the traditional kind, one that combats wood diseases such as esca and keeps the plant from drying out while ensuring its longevity,” says Roc Gramona.

”I’ve always believed than pruning is the elixir of life for the grapevine.”
-Marco Simonit

Roc Gramona embraced and implemented Simonit and Sirch’s theses from the outset, viewing them as natural. He was enthusiastic about them because they could definitely be implemented and there was a real issue to resolve. In his opinion, he was lucky to not have become “addicted” to traditional pruning before meeting them. With them, he learned the art of pruning and respecting the vine, and years later, with the INNOVI cluster, his father realised that there was no centre to spread this knowledge in Spain. And so the Acadèmia de Poda was born. Today, he directs and collaborates with friends in the profession, with two clear objectives: to train professionals to prune respectfully and to combat the more mechanised and less sustainable pruning system to guarantee the plant’s life and productivity.

Respectful pruning is based on four pillars whose application requires not only qualified labour, but also determination and industriousness. The first one is to ensure the branching of the plant. “If we constantly limit it, we mutilate it,” says Roc Gramona. “We have to allow the vine to grow gradually and respect its organic vitality. If we make large cuts, they won’t heal, and the plant dries out.” This is probably the main aspect, but the other three are also decisive. The second one is respecting sap flow. “This is achieved by studying the vascular structure of the plant. The cuts must be arranged so the flow is clean and continuous. In Jerez, this is ensured with the “rod and thumb” system. It is also achieved in the old, bush-trained vines in Priorat. “You realise that there is an order and precision, the fruit of ancestral knowledge,” remarks Roc Gramona. “The third is a more technical aspect that consists of making small cuts on the same side and respecting the crown. Each cut is a point that dries out, and the plant has to protect itself. By making small cuts, we dry out the vine less while reducing the area of ​​the exposed wound and the risk of disease.” Lastly, and very closely linked to the previous point, there is the practice of leaving protective wood, or “madera de respeto“, so that drying does not interfere with the vascular system. “We need to limit the damage done to the vine to the absolute minimum. And we have to prune roughly, which is less aesthetically pleasing but helps to achieve longer-lasting vineyards,” says the director of the Academia de Poda.

“The simplest part of pruning is obviously defining the vintage and wine production. But in addition to this, due to the costs involved, we have downplayed the importance of the knowledge that existed before and how to seek the longevity of the vines.” Roc Gramona is clear when asked to reflect on the most important viticultural practice for the life of the vine, an issue that wineries address at this time of year. “Respectful pruning means healthier plants. It’s a more sustainable practice, and it can be adapted for all training systems,” according to the director of Academia de Poda. However, he provides some context: “Bush training was the oldest, most widespread vine training system on the Iberian Peninsula until 50 years ago, and it’s the method that allows the best application of the four pillars of respectful pruning. This is because it’s a free training system, allowing the plant to grow three-dimensionally, without space limitations. In the bush training of old vines, we see how pruning has been carried out in the past 50 years. We also observe that when the cordon was introduced as a training system, it was done with a lack of awareness. Cordon training has made us forget bush training, and the bush trained vines have been pruned as if it were cordon. That’s pretty upsetting to see.”

Not everyone has the expertise, but in the vineyard, pruning must be viewed with a long-term vision. Roc Gramona stresses its importance: “When we prune, instead of assessing the production of the coming year, we have to think that the plant can last more years. It’s a vision they had in the past, but we’ve forgotten it with the arrival of mechanisation and more extensive agriculture.”

“He found a meditative rhythm, a time to commune in the silence with the frosty vineyard. In biodynamics, this (pruning) was a key moment to talk to the vines.” – Caro Feely

“In France, fieldwork is much more highly valued, and there are many professionals focused on pruning. It is valued knowledge. Here, that isn’t the case. Until now, it hasn’t been given the priority it deserves, and the only practices have been cutting shoots and leaving buds on the vine to ensure production, so those who do this work go unrecognised. That’s why there is so much turnover on the vineyard teams, and you constantly have to train the teams,” explains Roc Gramona with concern. In this respect, the collaboration between Academia de Poda, Mercè Fontanelles Foundation and LaCaixa to train people at risk of social exclusion is particularly interesting. The initiative has been a great success due to the high percentage of job placement among the participants. “There is the stigma that unaccompanied minors are a disaster, and I completely disagree with that. They are highly motivated and do a very good job,” says Roc Gramona.

“You know what? The best thing about Academia de Poda isn’t the fact that it spreads knowledge and standardises concepts, but that there are participants from different companies and dedicated young people like Lluís Coll, Technical Director of Viticulture at Vallformosa, and Roger Rovira, Director of Viticulture at Recaredo, to name a few. We have the same philosophy that we have been trying to communicate since 2014,” explains Gramona.

“We are observing that awareness is growing significantly. The sector knows there is a problem and needs to do something about it. This is the fifth year we are offering training, and we find that young people pick it up very quickly. It is harder for older winegrowers because they are more set in their ways and have a greater tendency to prune the vines too much,” explains Roc Gramona. Despite the pandemic, the demand for consulting is on the rise. Against all odds, requests have grown because word of mouth “is making a big impact,” he adds. They will soon travel to Ribera del Duero and Madrid to train teams at wineries as prestigious and diverse as Vega Sicilia and Comando G. Perhaps the time has come to acknowledge and emphasise the importance of pruning, an intimate expression of the relationship between man and vine that, according to Roc Gramona, must always begin by mastering the use of manual pruning shears: “Because that way you’re aware of the damage you are doing to the plant or the strength you need. Once you learn that, the best tool is a pair of electric pruning shears because they are more efficient and precise.”