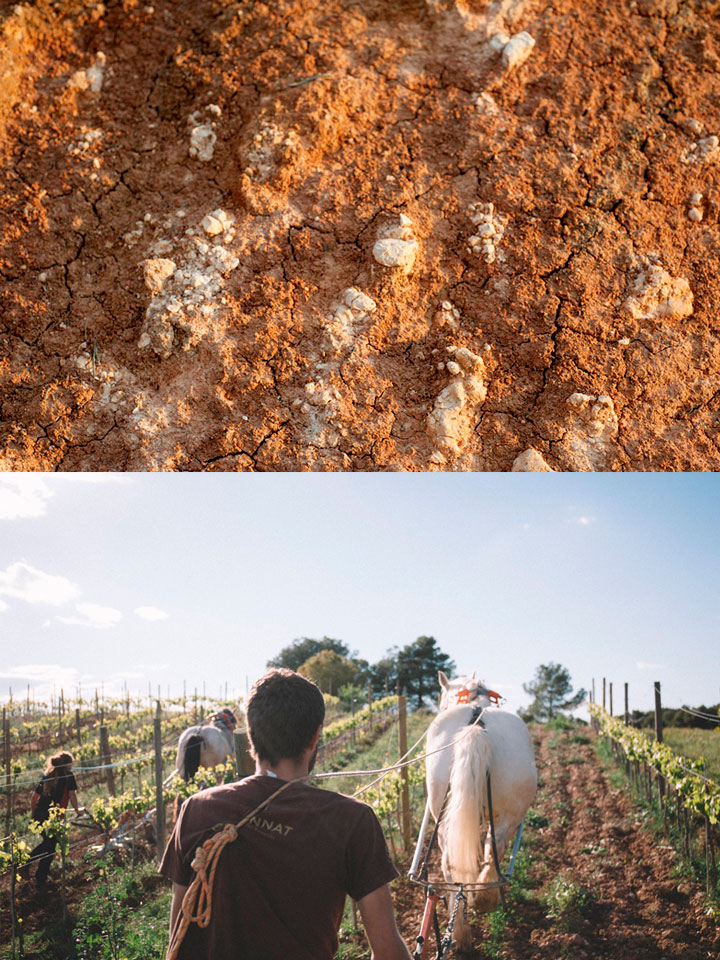 According to Lewis Thomas, the 20th-century American physicist, essayist and researcher, “the most solid piece of scientific truth I know of is that we are profoundly ignorant about nature”.

In fact, some books on conventional agriculture define soil as “inert matter in which plants grow”. The entire conventional, globalised and industrialised agro-livestock system, based on the use of synthetic chemical materials, is built on this definition and it is also associated with an entire commercial, economic and political system that completely disregards the importance of soil within the ecosystem. But, in reality, the soil could not be more important, because it contains more living creatures than there are human beings on the planet. The soil should, therefore, be considered sacred.

The wine world has a very distinctive history that has been founded on tradition for generations.  Unfortunately, over recent decades, this tradition has taken a back seat and the latest advances in both machinery and products have been introduced without a second thought. This, in turn, has enabled us to boost production, reduce working times and require less human labour. In short, it has led to a total and complete break of the bond between human beings and agriculture.

The human race has a need to explore its limits and has done this for years and the good thing about this is that it is also able to learn from its mistakes and can, therefore, “relearn” how to treat the earth, because with a dead soil no other living being can exist, not even the human kind. Our challenge is to rekindle life underground, so that life above it can continue to exist.

And for this to happen, minerals, microbiology and organic matter need to interconnect to give us the healthy, CO2-rich soil that is the foundation of life. Over the years we have robbed the earth of CO2 and we must now work to restore this. And to understand how important CO2 is, one just has to know that a soil that increases its CO2 content by 1% can retain up to 140,000 additional litres of water per hectare per year.

Composting organic waste, maintaining plant cover, including animals in the vineyards and ploughing these vineyards using animal traction are some of the most beneficial practices we can implement in our countryside in order to rekindle life.

Agriculture has been around for some 8,000 years. To begin with, it was based on human strength assisted by some farming implements, until approximately 4,000 years BC, when animal traction was introduced as a system of cultivation. The tractor appeared only 100 years ago when the work became mechanised, and now practically no one would consider working a vineyard without one. This tool has brought comfort to our lives, but not quality to our planet. Mechanical traction unchecked and uncontrolled is, without doubt, one of the worst enemies of the soil as it strips it of life and makes it impermeable. And an impermeable soil cannot absorb water. What’s more, it erodes the soil and therefore causes soil loss.

Animal traction, on the other hand, has multiple benefits not just for the soil, where it facilitates water drainage, along with the growth of the roots and their ability to attain the bedrock, but also for those who go out on the land and work it, and even for today’s economic and socio-cultural system. Let’s look at some of these benefits:

In addition to all these benefits, working the soil with animal traction enables the winegrower to be much closer to the land, feeling it, observing it and being more attentive to the needs of each individual plot.

In our area, the Penedés, it is exciting to see that several winegrowers are returning to animal traction to plough their land. This is not just a question of fashion or the revival of traditions, but a question of principle, of a working philosophy. Like everything in life, it has its advantages and disadvantages, but above all, it has a purpose. Our purpose is to have a living soil, in which the vines can find their maximum expression and whose fruit, once turned into wine, has its own personality and represents our “terroir” i.e. a climate, a geology, a topography and a soil with its microbiota (Bourguignon, 2019). At Gramona, we use animal traction to achieve this objective, which does not, however, mean that we ignore advances in technology. The tractor has its uses, but it must be used sparingly.

The use of animal traction for cultivation is not a requirement of biodynamics. It is a complementary practice. Basically, it is one more tool that we have at our disposal to bring about change. And, in fact, biodynamics, a form of viticulture that is also complementary, rather than an alternative, to organic growing, teaches us that the basis of all evolution lies in constant observation and, above all, in the sharing of innovative practices and different work protocols among vignerons around the world. We should inspire others to put them into practice (within their own context) and even appropriate them. We have a lot to learn and it is necessary and important to create indicators by observing our vineyards and the effects of our practices. For some years now, we have been carrying out this work with our fellow growers in “Alianzas por la Tierra”, a group which today consists of 12 winegrowers who work closely with Gramona in the Penedés region.

As part of our future plan to create a code of good practice and share it with other winegrowers, we have also established alliances outside our own area. Following the last annual congress of the “Mouvement de l’Agriculture Bio-Dynamique”, the body for the development of biodynamics in France, we have joined forces with Château l’Hospitalet, in the French wine region of Languedoc, and Château Palmer in Bordeaux, wineries with which we share objectives and very similar ways of working. From this meeting emerged an alliance with the objective of sharing our learning and exploring how to enhance the vitality of the vineyards and combat the drought that has been affecting our areas for several years now.

Today, we are already working together and sharing our trials and experiments, focusing on topics such as plant vs. animal fertilisers or compost, increasing assimilable nitrogen, reducing sulphur doses and using fresh milk to combat powdery mildew, increasing the use of plants such as horsetail or nettle to reduce the effect of sunstroke and mildew, or preventing esca by means of a respectful pruning to help the vine to heal better, and so on…

But the most remarkable thing to come out the time we have spent working organically and biodynamically is the learning we have gained from reverting to the use of horses to plough the land. Things that are not taught in universities, courses or books. We have learned much more about each of our vines, each soil type, about when you can begin the work, the pace of the work, and about the importance of the connection with the animal. In short, we believe that it has led us to another dimension of viticulture.

We started in 2014 and today we are still learning with the introduction of four horses to the vineyards over the last six years. These four co-workers are Chick, a Breton, Altaïr, a Percheron, Divine, from the Ardennes, and Corsaire, a Trait du Nord. With these horses and thanks also to the tireless effort and commitment of our team, we have turned our dream into a reality: to work with animal traction on 22 hectares of our land, where we grow the grapes that go into the III Lustros, Celler Batlle and Enoteca. A horse is capable of working up to seven hectares during the vegetative cycle when everything goes well. But horses are also living beings and their colics, colds, anaemias and hormonal states also affect them.

To close the biodynamic circle, in which the biodiversity of the local area is one of the greatest prizes we can attain, Gramona has a farm in the middle of its vineyards, which is home to horses, sheep, cows, chickens, geese, donkeys and peacocks. This provides Gramona with the ingredients necessary for the creation of preparations and compost, as well as feeding the estate’s ecosystem.  We take advantage of the amazing symbiotic relationships that exist between animals, plants and soil life, recovering the natural resources that are regenerated through polyculture systems and using animals to spontaneously reintroduce CO2 into the atmosphere.

In short, we are trying to revive agricultural practices that our grandparents used back in their day, knowledge built up that we have neglected for years and that we are now trying to revive with the aim, not of sustaining what we have today, but of rebuilding, of regenerating what we have lost. We are conscious that this is the task of our generation, because not only does the personality of our wines depend on it, but also the health of our soils, our own health and that of our planet.

The best part of all this is the realisation that we have a long path ahead of us. At Gramona, this way of working and treating the land so that it gives us its finest fruit is beginning to take root, but we are very aware that there is still much more to be done. That is why we firmly believe in alliances, which are vital to bringing out real change. Sharing what one learns is the best way to keep growing.

Jaume is a member of the fifth generation of the Gramona family, a family with a winemaking tradition dating back to the mid-19th century. He has a reputation of being a hard worker possessing innate creativity.  An indefatigable researcher into the secrets of wine, Jaume is the family winery’s oenologist and technical director. He holds a Diplôme National in oenology from the University of Dijon, Burgundy, obtained in 1984. Since 1989, he has also been an associate professor of sparkling wines at the Faculty of Oenology of the Rovira i Virgili University in Tarragona.

Teresa is energetic, highly-driven and passionate about the land and about animals. After graduating as an agricultural engineer, this young talent from La Rioja moved to the Penedés region 5 years ago to become Gramona’s head of viticulture overseeing the work in the vineyards. During this time she has trained in biodynamic growing in Spain, France and Italy.